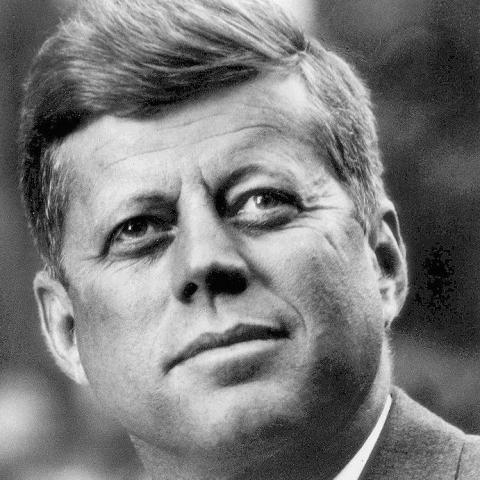 The Cuban missile crisis of October 1962 was perhaps the closest the world has come to nuclear war. Only four years had passed since the establishment in Cuba of the first communist state in the western hemisphere under revolutionary leader Fidel Castro. After a disastrous attempt at toppling Castro through the botched Baby of Pigs invasion eighteen months previoulsy, American intelligence had now discovered that Russian-backed nuclear missiles had been installed on bases on the island, a short distance from the American mainland. On October 22, President John F. Kennedy announced a blockade of Cuba to prevent additional Russian missiles from being delivered to the bases. It was an ominous pronouncement as Russian ships were already en route to Cuba, reportedly carrying missiles. The world’s two biggest nuclear powers were engaged in a standoff that had the entire globe gripped in fear.

Into this crisis stepped Bertrand Russell. Even though Russell had celebrated his 90th birthday earlier in the year, he was not one for slowing down. Throughout the 1960s he would intervene as he saw fit in such affairs as the Sino-Indian conflict, the Vietnam War, and the American civil rights movement. He believed that his position of privilege as an aristocratic Briton came with responsibility. He also had at his disposal an energetic and strident young American secretary, Ralph Schoenmann. Schoenmann would come to intervene in Russell’s affairs in ways that caused deep concern among many in Russell’s circle. For the time being, however, all eyes were on the situation at hand. Russell would later observe, in Unarmed Victory: “Never before in the course of a long life have I experienced anything comparable to the tense anxiety of those crucial hours.”

On October 23, the day after the American blockade was announced, Russell dispatched telegrams to President Kennedy and Russian Premier Nikita Khrushchev. The month previous, he had issued a very balanced press statement on Cuba that summed up the international dilemma quite succinctly. “If the United States invades Cuba,” he wrote, “it may provoke dangerous warlike action from the Soviet Union. If Russia supplies arms and troops to Cuba, the danger of unwise and warlike action by the Americans will be increased, with the imminent risk of world war.” To Russell, the obvious solution was for “the United States not to invade Cuba” and for “the Soviet Union not to give armed support to Cuba.”

Russell's telegrams of October 23, however, did not convey this same balance. To both leaders he pleaded for calm, but while his message to Kennedy pronounced that there was “no conceivable justification” for the blockade—which was in keeping with his earlier statement—his message to Khrushchev offered no criticism of Russia’s “armed support to Cuba.” In the moment, however, it seemed hardly to matter. It appeared that neither country, nor the press, had taken any notice whatsoever of Russell’s intervention. That would soon change.

On October 24 Russian radio broadcast a letter from Khrushchev that was, in fact, a reply to Russell’s telegram of the previous day. Suddenly, Russell was at the centre of the crisis, and his quiet Welsh home of Plas Penrhyn was almost instantly overrun with newspaper and broadcast reporters. People throughout the United Kingdom and around the world were once again intrigued by the pronouncements of the sagacious Russell who, less than a decade earlier, had issued the prophetic Man’s Peril, warning of the dangers of nuclear war (see letter to Albert Einstein).

Khrushchev’s reply to Russell did not acknowledge the installation of missiles in Cuba but did offer a commitment to “do everything in our power to prevent war from breaking out.” Russell (and likely Schoenmann) seized upon this statement and immediately issued a further telegram to Kennedy urging him to “make a conciliatory reply to Khrushchev’s vital offer.” Kennedy’s utter annoyance and disdain for Russell’s overture is evident in his reply telegram, in which he dismissively tells Russell: “your attention might well be directed to the burglars rather than to those who have caught the burglars.”

Russell was not yet finished, however, and further telegrams were sent to Kennedy, Khrushchev, Castro, and others, as well as a lengthy letter to Khrushchev on the 26th praising him for the “caution” he had shown throughout the standoff. Then suddenly, on October 28, the crisis ended. The Russians agreed to dismantle weapons already in Cuba and not to supply others, while the United States ended the blockade and agreed not to invade Cuba. The Russian ships sailing to Cuba turned back. To the casual observer, it may have appeared that Russell’s efforts had carried the day. Russell himself would hear none of it, telling a friend: “I do not consider that I have altered the course of history by one hair’s-breadth.” Writing a few years later in his Autobiography, Russell observed that, while he regretted none of his actions during the crisis, he did concede an “olive branch” to his critics: “I am sorry that I did not couch my telegram of October 23rd to President Kennedy more gently.” The balance of his September statement was now somewhat restored.

The passage of time has proved Russell’s self-evaluation correct. The resolution came about primarily because of direct communications between Kennedy and Khrushchev and not because of Russell’s involvement. Nevertheless, Russell’s role cannot be completely overlooked, at least in the popular imagination. While some observers were alarmed by Russell’s apparent deference to Russia and feared undue influence by Schoenmann, many others simply admired what they saw as the fearless heroism of an ancient man of considerable authority. That admiration was on full display at home in Wales when the local village feted Russell with a parade of thanks, complete with a sign proclaiming ‘Thanks to Bert, we’re still unhurt.’

I am in receipt of your telegram. STOP  We are currently discussing the matter in the United Nations STOP  While your messages are critical of the United States COMMA  they make no mention of your concern or the 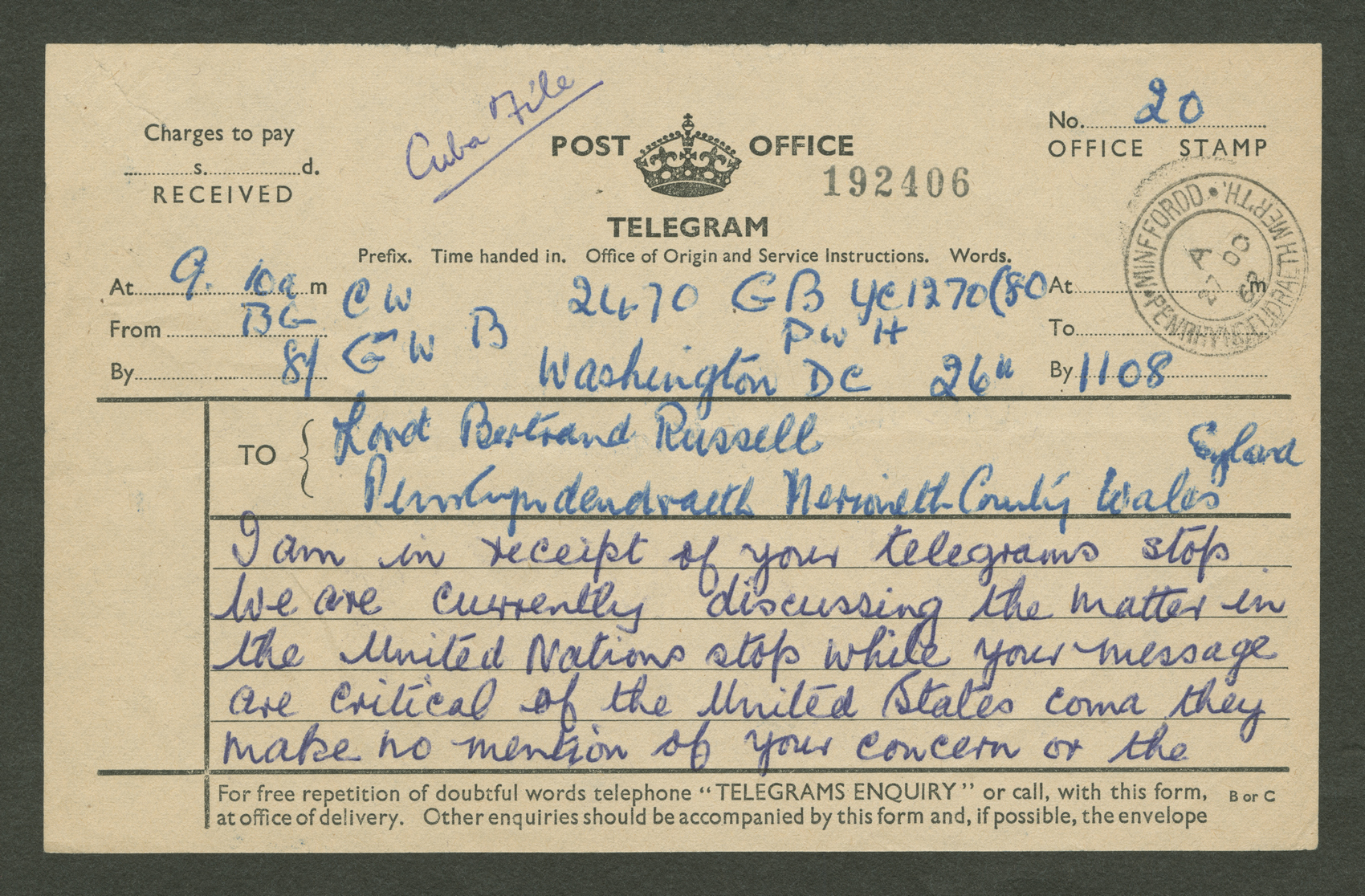 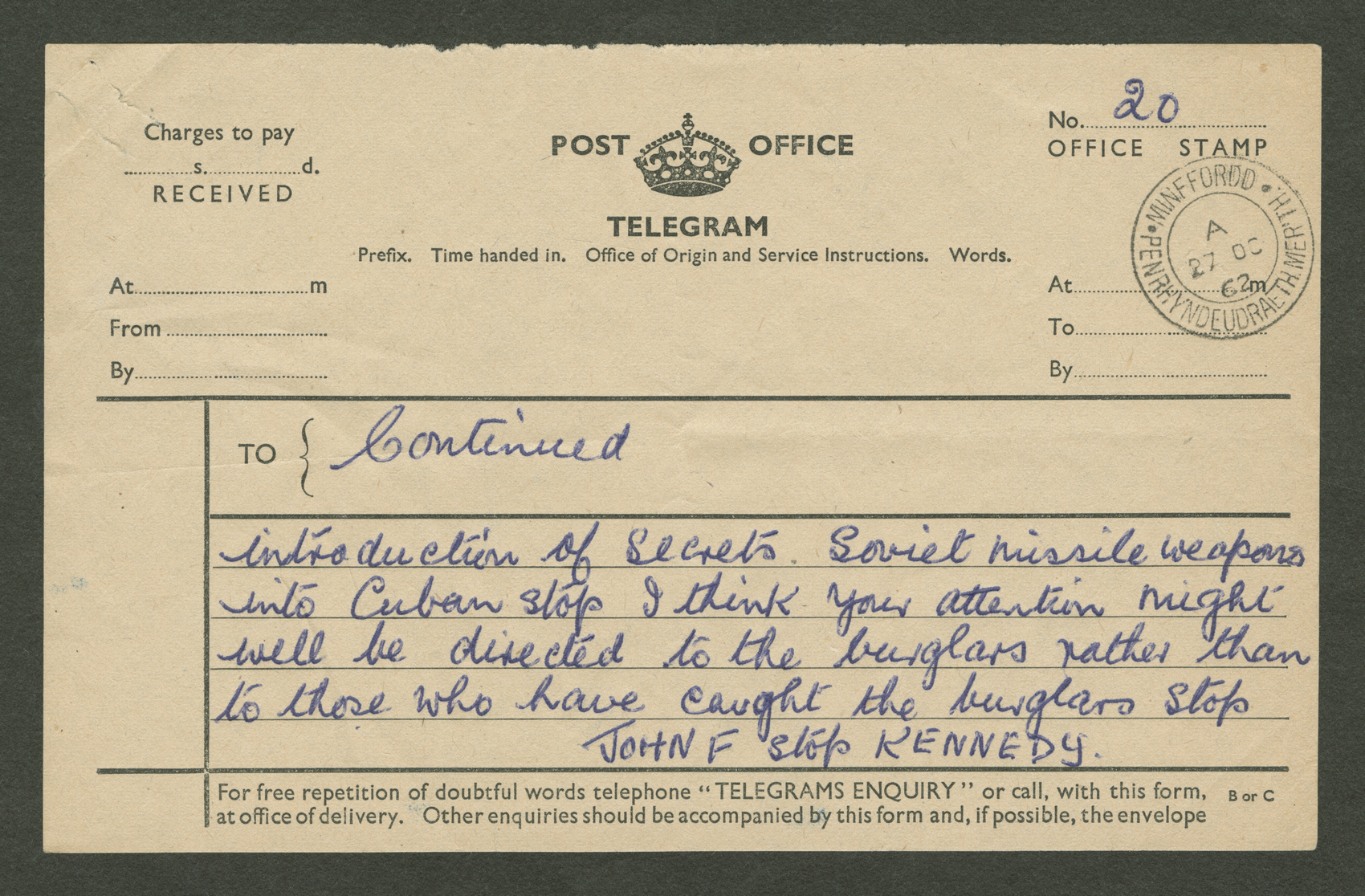 Bertrand Russell Archives, Box 9.80, Document 192406. Public domain in Canada. Copy provided for personal and research use only. For any other use, the user assumes all risk.