“I am gladly willing to sign your excellent statement.”

“I am gladly willing to sign your excellent statement.” 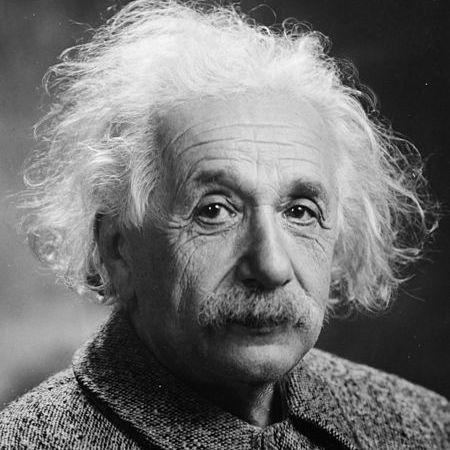 In the 1950s, Bertrand Russell was growing increasingly alarmed—like many others around the world—by the proliferation of what he called the “weapons of mass extinction” that were being developed by both the United States and Soviet Russia. Unlike many, however, Russell was in a position to do something about it. His 1950 Nobel Prize in Literature had solidified his standing as one of the most prominent public intellectuals in the world. Despite having turned 80 in May of 1952, he decided to put his fame to good use, just as he had done so often in the past and would continue to do throughout his old age. As he stated in his Autobiography: “I felt I must find some way of making the world understand the dangers into which it was running blindly, head-on. … I therefore set to work to compose a new dirge for the human race.”

The “dirge” was broadcast on BBC radio on December 23, 1954. A rapt and anxious audience of more than 6 million tuned in. Russell recounted: “I stated all my fears and the reasons for them. The broadcast, now called ‘Man’s Peril’, ended with the following words: ‘There lies before us, if we choose, continual progress in happiness, knowledge, and wisdom. Shall we, instead, choose death, because we cannot forget our quarrels? I appeal, as a human being to human beings: remember your humanity, and forget the rest. If you can do so, the way lies open to a new Paradise; if you cannot, nothing lies before you but universal death’”.

‘Man’s Peril’ was just the beginning of Russell’s efforts. His account continues: “as I assessed the response that my broadcast had achieved and considered what should be done next, I had realized that the point that I must concentrate upon was the need of co-operation among nations. It had occurred to me that it might be possible to formulate a statement that a number of very well-known and respected scientists of both capitalist and communist ideologies would be willing to sign calling for further joint action. Before taking any measures, however, I had written to Einstein to learn what he thought of such a plan.”

Russell and Albert Einstein (1879-1955) had been acquainted by this time for decades and had corresponded since the early-1930s. Einstein was one of many who was appalled by the way in which Russell was treated by the College of the City of New York in 1940 (see Vera Brittain letter). Thereafter, he had lobbied for Russell’s appointment to Princeton but had to wait until 1943 to welcome him there. As Russell recalled: “While in Princeton, I came to know Einstein fairly well. I used to go to his house once a week to discuss with him….” The two men admired each other greatly and shared a concern for the world in the years following the Second World War, though they had taken different paths to get there. Einstein had come earlier than did Russell to support armed force against Hitler and, after the war, immediately threw himself into anti-nuclear politics, while Russell’s Cold War viewpoint was fairly hawkish until the Soviets tested their own bomb in 1949, and even somewhat thereafter. Regardless, by 1955 they were both most emphatically on the same page.

Einstein was supportive of Russell’s plan for a statement but was very ill and could do little to help. Russell noted: “He had begged me, nevertheless, to carry out my idea and to formulate the statement myself. This I had done, basing the statement upon my Christmas broadcast, ‘Man’s Peril’.”

What Russell next wanted was Einstein’s formal approval of his statement—Russell realized that other scientists would be more willing to lend their name to something that Einstein, the world’s greatest and most famous scientist, had endorsed. “I had … sent the statement to Einstein for his approval, but had not yet heard what he thought of it and whether he would be willing to sign it.” While waiting for Einstein’s reply, Russell was on a flight from Rome to Paris when “the pilot announced the news of Einstein’s death. I felt shattered, not only for the obvious reasons, but because I saw my plan falling through without his support. But, on my arrival at my Paris hotel, I found a letter from him agreeing to sign.”

That very brief letter, dated April 11, 1955, is on display here. In it, Einstein states categorically: “I am gladly willing to sign your excellent statement.” As Russell added: “This was one of the last acts of his [Einstein’s] public life.”

With Einstein’s dramatic, deathbed letter, Russell was able to garner nine other signatories— Max Born, Percy W. Bridgman, Leopold Infeld, Frédéric Joliot-Curie, Herman J. Muller, Linus Pauling, Cecil F. Powell, Joseph Rotblat, and Hideki Yukawa. With the exception of Infeld and Rotblat, all of the signatories were Nobel Laureates. (Born’s name was mistakenly omitted from the initial release). The statement, which soon became known as the Russell-Einstein Manifesto, was released to great acclaim and worldwide news coverage at a press conference at London’s Caxton Hall on July 9, 1955.

One of the most practical and enduring outcomes of the Manifesto was the establishment of the Pugwash Conferences on Science and World Affairs, the first of which was held in Pugwash, Nova Scotia, in 1957 (see letter from Joseph Rotblat). The Conferences would be awarded the Nobel Peace Prize in 1995, a fitting legacy to the remarkable collaboration between Russell and Einstein forty years earlier.

You can read the text of the Russell-Einstein Manifesto here.

There are seven original Einstein letters to Bertrand Russell in the Russell Archives; three of them have been published in Russell’s Autobiography.

Thank you for your letter of April 5th. I am gladly willing to sign your excellent statement.[1]  I also agree with your choice of the prospective signers.[2]

[1] Russell’s letter included the statement that would become known as the Russell-Einstein Manifesto.

[2] Russell’s suggested 15 signatories, in addition to himself and Einstein, were: Lord Adrian, H. J. Bhabha, Niels Bohr, Max Born, A. Haddow, Otto Hahn, L. Infeld, F. Joliot-Curie, Li Sze Kuang, W. Pauli, C.F. Powell, Manne Siegbahn, D. Skobeltzyn, H.C. Urey, and Hideki Yukawa. Of these, only 5 actually signed: Born, Infeld, Joliot-Curie, Powell, and Yukawa. The other 6 signatories were: Perry W. Bridgman, Herman J. Muller, Linus Pauling, Josef Rotblat, and, of course, Russell and Einstein. All were Nobel laureates, with the exception of Infeld and Rotblat (who would later receive the Nobel Peace Prize in 1995). Born’s name was mistakenly left off the manifesto when it was first released. 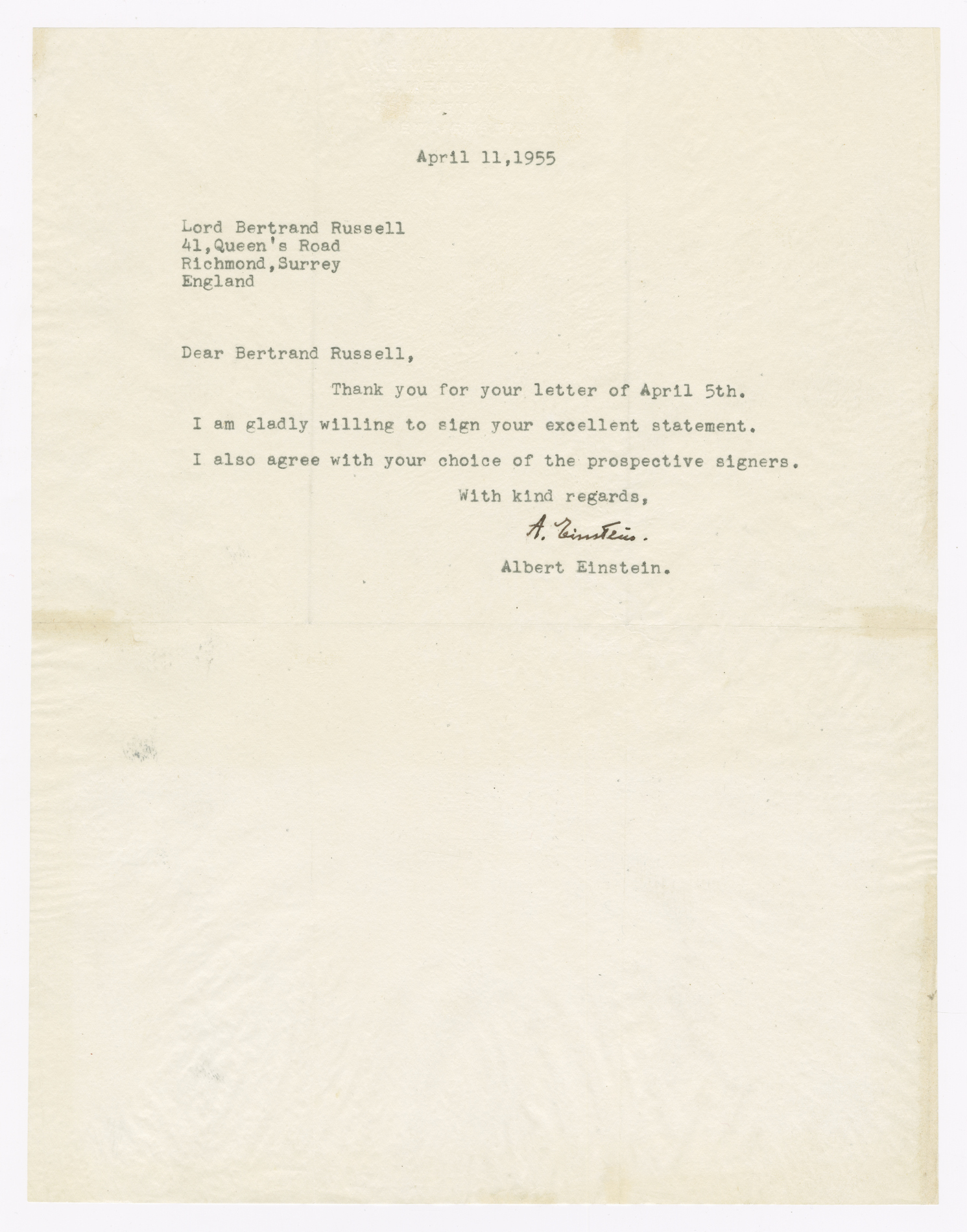 Bertrand Russell Archives, Box 5.15, Document 049705. Public domain in Canada. Copy provided for personal and research use only. For any other use, the user assumes all risk.