“he has served as the conscience of humanity”

“he has served as the conscience of humanity” 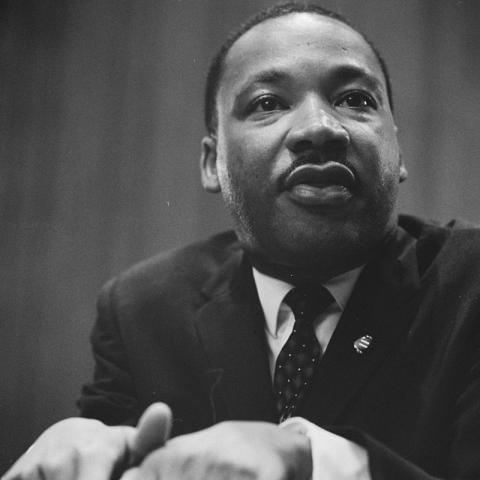 Another tribute came in the form of this letter from American civil rights activist Martin Luther King, Jr. Russell was an admirer and supporter of King’s non-violent stance for racial equality in the United States, while King, as is obvious from this letter, was equally admiring of Russell’s stand for peace. He tells Schoenman that Russell’s “genuine humanitarian concern, and unswerving devotion to the ideal of peace will stand as an inspiration to generations yet unborn.  Indeed he has served as the conscience of humanity…”.

Russell had long been sympathetic to black civil rights and, as the 1960s went on, would speak in support of such figures as Muhammad Ali, Dick Gregory, and Malcolm X. He also came to express understanding for those Afro-Americans who decided to fight back against oppression. Following the Watts riots that occurred in Los Angeles in 1965, Russell wrote in “The Negro Rising,”  “The oppressed Negro nation is rising against its three hundred year subjection. Why should people not revolt against conditions wherein they are shot down or beaten to death in police cells?” Russell was largely condemned in the American media for such provocative statements, and many believed that he was being unduly influenced by the often combative Schoenman.

Three years later, King was assassinated. On that occasion, Russell wrote: “The murder of Dr. Martin Luther King is a foretaste of the violence erupting in America because the U.S. Government cannot finance a full-scale war in Vietnam and alleviate the misery of its most oppressed citizens. Dr. King’s personal courage was remarkable, but many black Americans will conclude that his moderation was ineffective against a structure built upon vicious racism.”

In 1969, near the end of his life, Russell—in a statement prepared for the Italian newspaper Corriere della Sera—pointed to King and Mahatma Gandhi as "the best known exponents" of non-violent action in the 20th century and lamented that both had been “shot dead by fanatics."

I am very happy to send greetings to Bertrand Russell on the occasion of his 90th birthday.[2]  His genuine humanitarian concern, and unswerving devotion to the ideal of peace will stand as an inspiration to generations yet unborn.  Indeed he has served as the conscience of humanity on an issue that no individual or nation can permanently ignore.  He has reminded all mankind that war is obsolete and that disarmament is a necessity for the salvation of mankind.  If somehow modern man is sensible enough to bring an end to the arms race, and thereby make human survival a reality, the name of Bertrand Russell will always stand out as one of the pioneers in bringing us back to reality.  Certainly his work and his dedication will stand as one of the significant epics of the twentieth century.

[1] Schoenman had requested birthday greetings from King and many other well-known figures. The tributes were published in Into the 10th Decade: Tribute to Bertrand Russell (1962), available at the Bertrand Russell Archives. 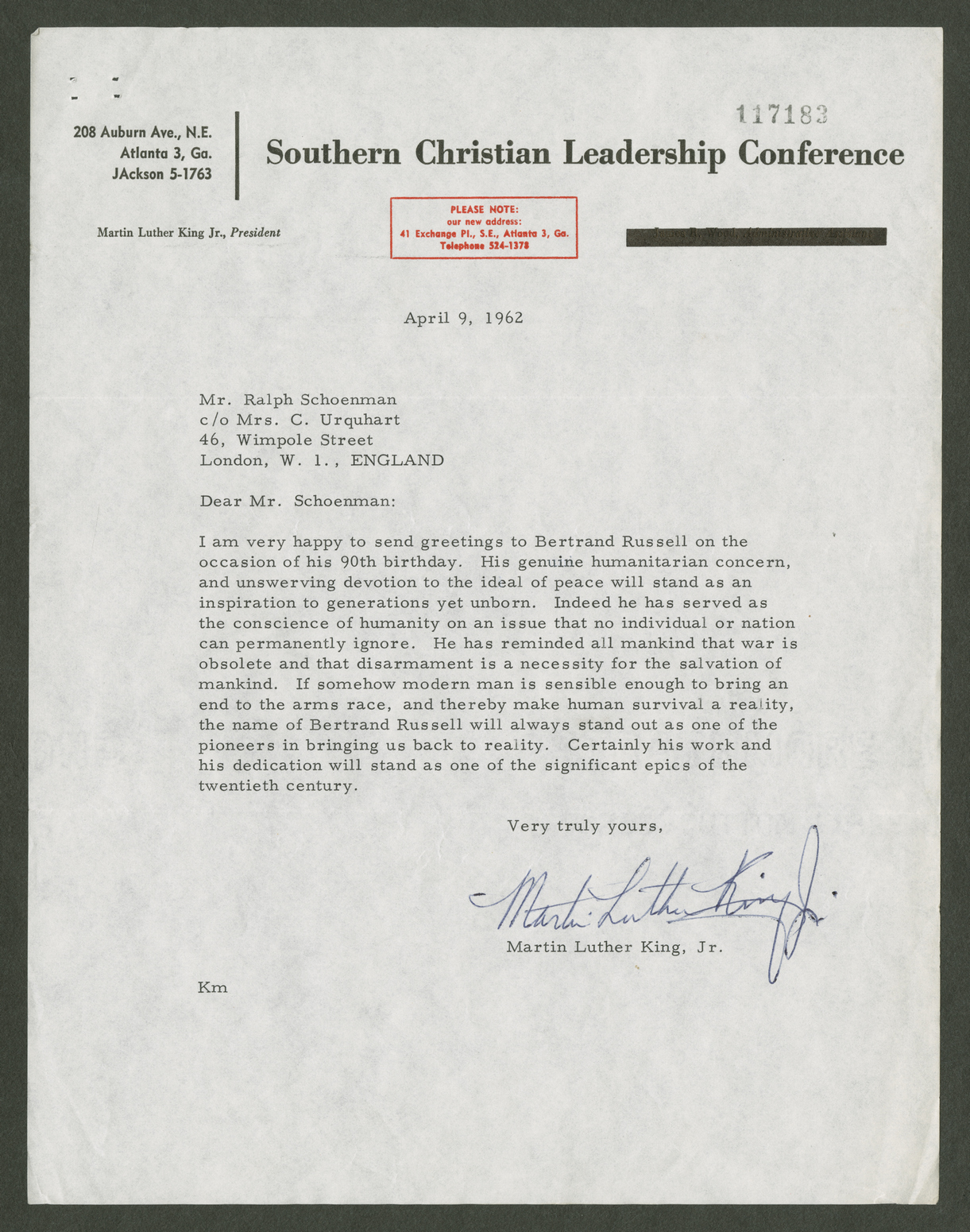 Bertrand Russell Archives, Box 11.06, Document 117183. Public domain in Canada. Copy provided for personal and research use only. For any other use, the user assumes all risk.