“It’s a Yoga exercise, of course: but none the worse for that.”

“It’s a Yoga exercise, of course: but none the worse for that.” 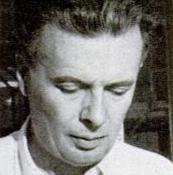 Russell met fellow pacifist Aldous Huxley (1894-1963) during the First World War at Garsington, the home of Russell’s lover, Ottoline Morrell. Huxley was such a frequent visitor that the staff began referring to one of the guest rooms as ‘Mr Huxley’s room.’ Earlier generations of Russells and Huxleys were also acquainted—Aldous’ grandfather, T.H. Huxley, knew Russell’s parents, Lord and Lady Amberley.

While Russell and Huxley remained acquainted throughout their lives, they were never particularly close. Russell was actually closer to Aldous’ brother, Julian. In fact, in 1932, when Russell wanted to give Aldous some letters that his grandfather had written to Russell’s mother, he was pleased that Ottoline set up the meeting, telling her: “I don’t feel I know Aldous well enough to ask him myself without preliminary.”

Huxley, on the other hand, concluded that he knew Russell well enough to caricature him, along with Ottoline and others of the Garsington circle, in his 1921 novel, Crome Yellow. Russell appears as Mr. Scogan: “a small gaunt man … sitting rigid and erect in his chair. In appearance Mr. Scogan was like one of those extinct bird-lizards of the Tertiary. His nose was beaked, his dark eye had the shining quickness of a robin’s.  But there was nothing soft or gracious or feathery about him. The skin of his wrinkled brown face had a dry and scaly look; his hands were the hands of a crocodile. His movements were marked by the lizard’s disconcertingly abrupt clockwork speed; his speech was thin, fluty, and dry.” He is further depicted as an elitist aristocrat. For the most part, Russell remained mum about his opinion of Crome Yellow, but in the 1960s he claimed that he was annoyed that Huxley put into the mouth of Scogan ideas that had originally been presented by Russell as a joke at one of Ottoline’s dinner parties.

In 1932 Russell was perhaps even more annoyed with Huxley’s much more famous novel, Brave New World, which Russell believed borrowed liberally from his 1931 book, The Scientific Outlook. He observed in a letter to his publisher that the novel was “merely an expansion of the two penultimate chapters of ‘The Scientific Outlook.’” He added: “the parallelism applies in great detail, e.g., the prohibition of Shakespeare and the intoxicant producing no headache.” Russell wondered if this was plagiarism; his publisher dissuaded him from pursuing it. Meanwhile, Russell held his tongue in his review of Brave New World that appeared in The New Leader in March 1932, referring to Huxley’s “usual masterly skill.” He did get a dig in later that year, however. In a July article entitled “On Imitating Heroes,” Russell made a passing remark that: “Modern young intellectuals in England are apt to model themselves upon Mr. Aldous Huxley or one of his characters, with the result that their behaviour becomes unnatural, stilted and priggish.”

By the mid-1930s, Russell had more important problems to deal with than his relationship with Aldous Huxley. He was in the midst of divorce proceedings with his second wife, Dora, which included a custody battle over their children. Russell was also facing serious financial issues—he was not able to sell as many articles or books during the Depression, and Telegraph House, which was his principle residence, was becoming a drain on resources. Just as it seemed things could not get worse, his relationship with his lover, Patricia ‘Peter’ Spence, formerly his children’s governess, hit a critical point in November 1934 when she fell in love with Richard Llewelyn Davies, the son of Russell’s longtime friend and lawyer, Crompton Llewelyn Davies. Russell was at a breaking point.

It was at this time that Huxley wrote the letter featured here. He and his wife had recently moved back to England after an extended stay in France, and Huxley and Russell occasionally socialized. From the letter, it would appear that Huxley was aware that there were stresses in Russell’s life because the bulk of the letter involves a description of a breathing exercise that Huxley uses to alleviate insomnia. After explaining the rhythm of breaths and heartbeats, Huxley concludes: “It’s a Yoga exercise, of course: but none the worse for that.  The cosmology may be bad, but the exercise seems to work.” Russell’s reply to Huxley’s letter is not extant, and it is not known if he ever tried the recommended exercise. A more immediate balm to his problems was provided by an extended holiday in the Canary Islands.

Both Russell and Huxley maintained a pacifist philosophy in the years leading up to the Second World War and were among the first members of the Peace Pledge Union when it was established in London in 1936. By the time the War broke out, both of them had taken up residence in the United States, with Huxley making the move first in 1937. Russell and Peter—their relationship temporarily repaired—had married in 1936 and had a son in 1937. They sailed for the US on 17 September 1938 where Russell had a one-year appointment as visiting professor at the University of Chicago, followed by a three-year appointment at UCLA. In California, Russell and Huxley became reacquainted. Russell would change his mind about his pacifist stance and ended up supporting the Allied war effort; the Russells returned to England in 1944. Huxley remained a pacifist and lived in the US, primarily California, for the rest of his life.

There are three other letters from Huxley in the Russell Archives. In addition, the Archives contains a copy of Crome Yellow (Russ Lib 0545) that had been owned by Russell’s wife, Patricia, but there is no copy of Brave New World.

I was so sorry we couldn’t arrange lunch or dinner tomorrow—but very glad that a meeting could be squeezed into the late afternoon.  I have a long-standing engagement to go, in the earlier part of the afternoon, to visit Wormwood Scrubs prison.[3]  I hope & think I shall be back by 5.30; but if I’m later than that, I do hope I shall still find you & that you’ll be able to stay on till it’s time for you to go

Have you ever tried the effect of breathing exercises on insomnia?[4]  I have found that slow regular breathing on some such rhythm as 6 heart beats in-breath, 3 heart-beats pause, 6 out-breath, 3-pause—rising to 8, 4, 8, 4; 10, 5, 10, 5, on higher still—produces very quieting & steadying effects.  It’s a Yoga exercise, of course: but none the worse for that.  The cosmology may be bad, but the exercise seems to work.

[1] The Huxleys had just moved to this London address.

[3] It is not known why Huxley was visiting the prison. 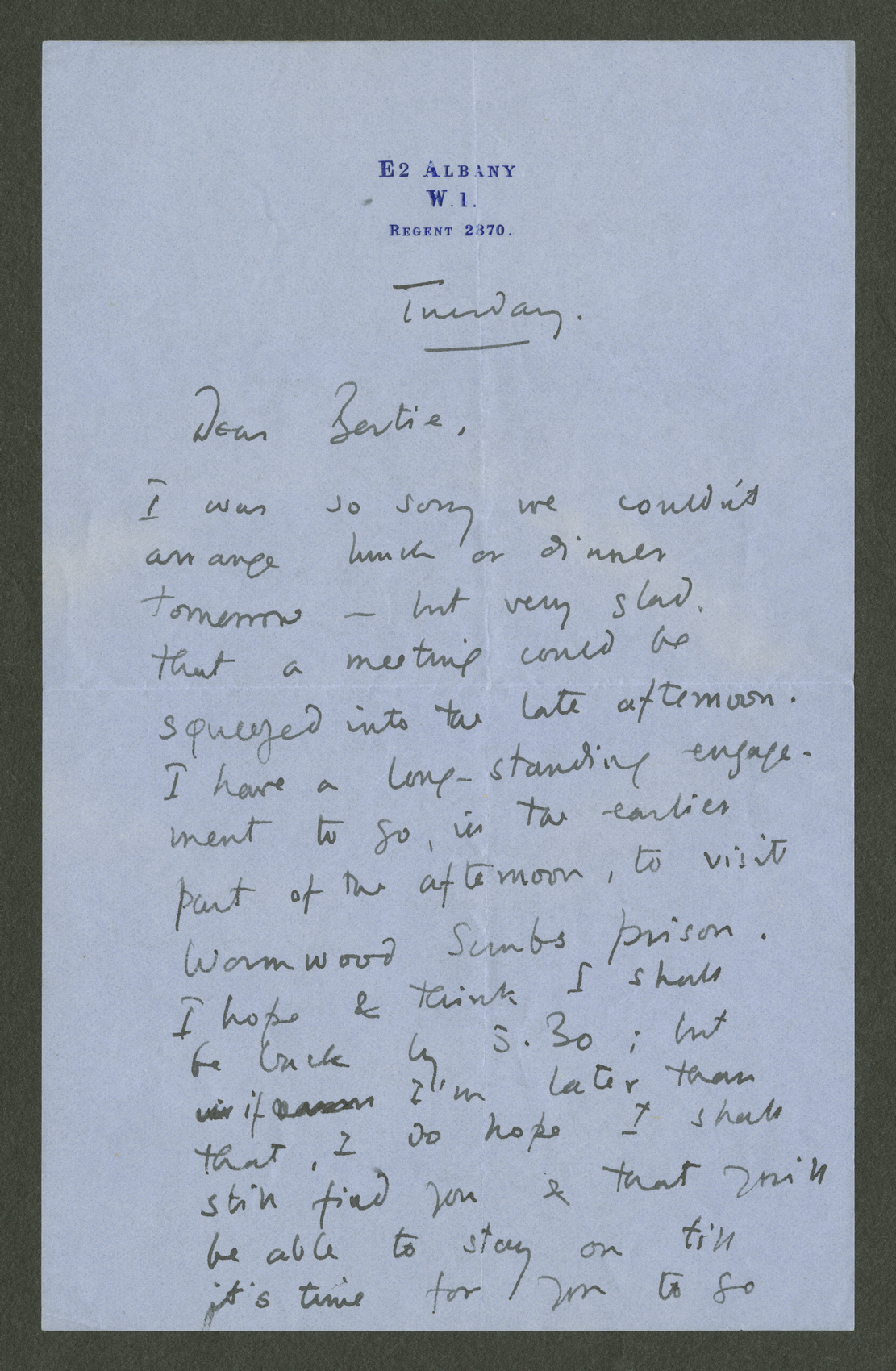 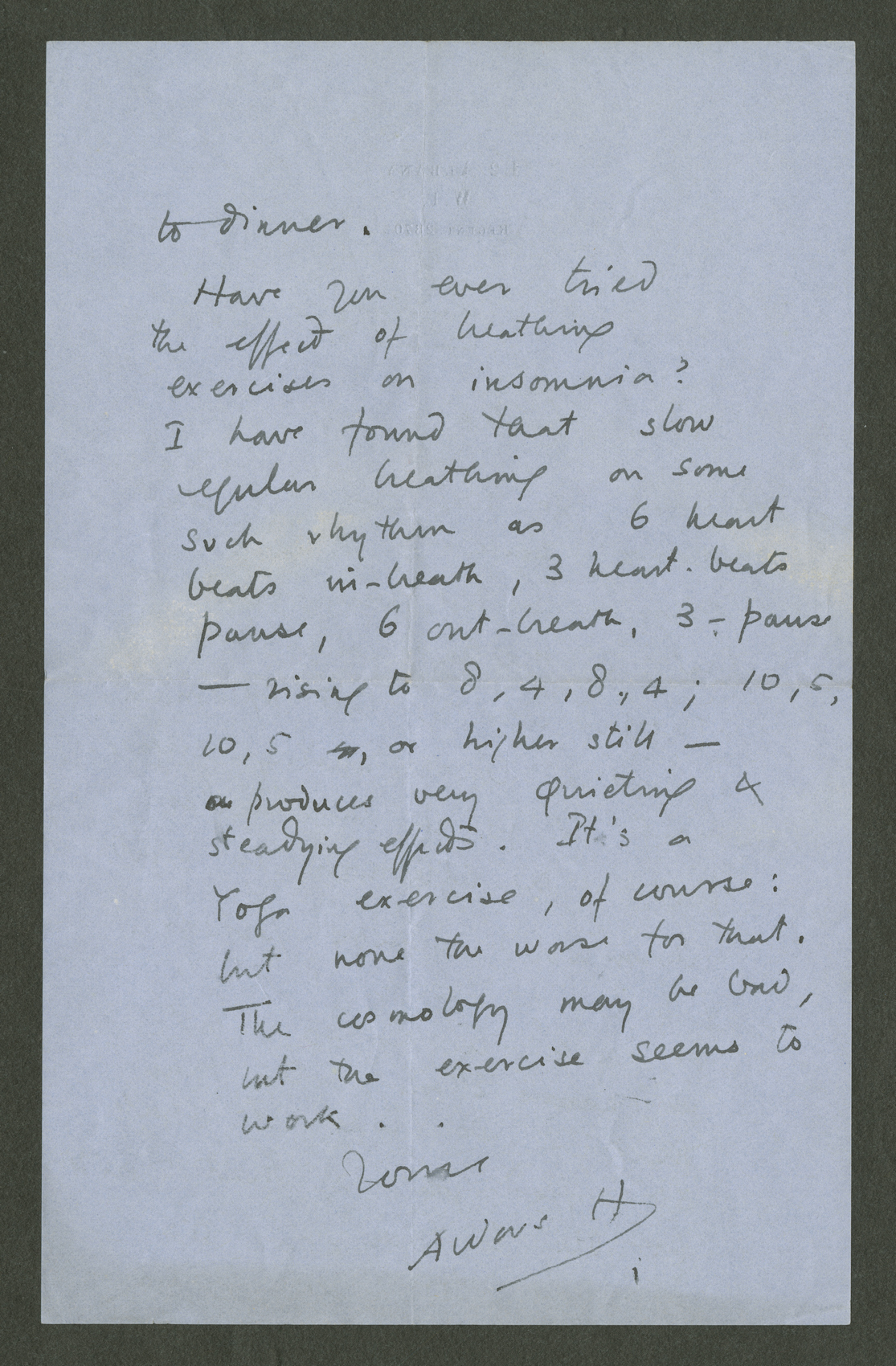 Bertrand Russell Archives, Box 5.24, Document 051335. Public domain in Canada. Copy provided for personal and research use only. For any other use, the user assumes all risk.