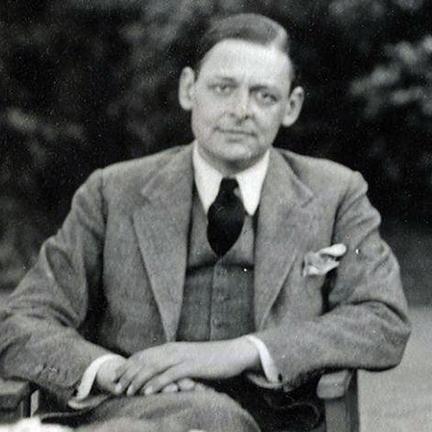 In the spring of 1914 Russell was a visiting professor at Harvard. One of his students was T.S. Eliot (1888-1965) who was pursuing a graduate degree in philosophy. As Russell recalled in his Autobiography, “I had a post-graduate class of twelve, who used to come to tea with me once a week. One of them was T.S. Eliot, who subsequently wrote a poem about it, called ‘Mr Apollinax’.” The poem was first published in Poetry in 1916 and would appear in Eliot’s first book, Prufrock and other observations, in 1917.

Russell returned to England in June 1914. Unbeknownst to him, Eliot arrived in England that summer, having decided to spend a year at Oxford. In October, they ran into each other on New Oxford Street in London. Despite his preoccupation with the outbreak of the First World War, Russell was delighted to see Eliot, and over the next two years would become intimately involved in Eliot’s life.

Those two years were eventful for both men. Eliot would complete his Harvard dissertation but would also decide that he was more interested in poetry than philosophy and would abandon the latter as a career. His ground-breaking poem ‘The Love Song of J. Alfred Prufrock’ was published in Poetry in June 1915. In the same month he married Vivien Haigh-Wood, a young English worman he had met just three months earlier. Their marriage was difficult almost from the beginning for several reasons, not least of which were Vivien’s frequent illnesses and Eliot’s attempts to establish a career in England, where he was now determined to stay.

Meanwhile, Russell was becoming a very public figure in his stand against the war, for which he received official condemnation, including, among other things, a conviction and fine, restrictions on travel, and, most painfully, dismissal from his lectureship at Trinity College. In his personal life, he would drift away from his lover, Ottoline Morrell, and would begin a new affair with Colette O'Niel (Constance Malleson) in the fall of 1916. He was also enduring tumultuous relationships with D.H. Lawrence and Ludwig Wittgenstein.

In the midst of all this activity, Russell took on a mentoring role in Eliot’s life which he believed he sorely needed. As Russell explained to Ottoline in a July 1915 letter, while he found Eliot “exquisite,” he also believed him to be “listless.” Russell used his connections to help Eliot receive writing commissions from such publications as The Monist and the International Journal of Ethics. He also lent the Eliots a room in his London flat. It is in response to Russell’s offer of his flat that we find Eliot writing this September 1915 letter, the first of over 20 original letters from Eliot to Russell found in the Russell archives. (The formal salutation “Dear Mr. Russell” would in future letters be replaced by “Dear Bertie,” and the signature “Thomas Stearns Eliot” by the diminutive “Tom”). The letter reveals the esteem and gratitude Eliot felt for Russell at this time. He writes: “Such generosity and encouragement means a great deal to me at present, above all coming from you.”

The living arrangement meant that Russell got to know both Tom and Vivien Eliot very well, to the point where Tom also looked to Russell for help in dealing with his relationship with Vivien. As Russell reported to Ottoline in November 1915: “I am every day getting things more right between them, but I can't let them alone at present, and of course I myself get very much interested. She is a person who lives on a knife-edge, and will end as a criminal or a saint—I don't know which yet. She has a perfect capacity for both.” Ottoline was concerned (with good reason) that Russell and Vivien might have an affair, and that is exactly what eventually transpired. The brief, unhappy episode occurred in 1917 during a brief lull in Russell’s relationship with Colette. It appears that Tom was either unaware of what had happened or chose to ignore it, at least initially.

After these early years, the close relationship between Russell and the Eliots ended, in part because of Russell’s dwindling interest in Vivien. Despite the circumstances, Vivien remained gracious in her dealings with Russell, while Tom distanced himself from him, seemingly in an effort to exert independence from his former mentor. Indeed, the intellectual chasm between Russell and Eliot—Eliot had written his doctoral dissertation on British idealist F.H. Bradley, whom Russell dismissed—deepened. On more than one occasion, Eliot wrote critical reviews of Russell’s thought and work. They especially diverged on the subject of religion, which came to a climax in 1927 when Russell published Why I Am Not a Christian, of which Eliot was scathing in his criticism, telling Russell it was “childish folly.” In that same year, Eliot was received into the Anglican Church. Meanwhile, Vivien’s health, especially her mental health, grew worse. In 1933 Eliot was granted a formal separation from her. Five years later Vivien was committed to a mental asylum. She died in 1947.

The passage of time brought a softening of feelings in Eliot’s view of Russell. In 1949 he wrote to Russell to congratulate him on his Order of Merit, calling it a “fitting though belated tribute” to “one of the few living authors who can write English prose.” The previous year, Eliot had been inducted into the Order and had also been awarded the Nobel Prize in Literature; Russell would receive his Nobel in 1950.

In 1964 Russell received his last letter from Eliot, who died the following year. Eliot had just been listening to Russell on the radio and tells him “I disagree with your views on most subjects” but “I thought you put your beliefs over in a most dignified and even persuasive way.” Eliot wanted Russell to know this “as you are getting on so far, and as I myself am, I hope, somewhat mellowed by age.” He signs the letter “with grateful and affectionate memories.”

Note: Russell’s copy of Prufrock and other observations can be found in the Russell Archives (Russ Lib 0693).

Dear Mr. Russell
Your letter[1] coming on top of all your other kindnesses, has quite overwhelmed me.  Such generosity and encouragement means a great deal to me at present, above all coming from you.  I have been intending to write to you ever since I got here, but have had so many and such worrying American letters to write, that I have been quite exhausted each day when I have done them.
When you first spoke to me about the flat, I was too overpowered by such a generous offer to discuss the practical details.  Vivien and I

both feel very strongly that, although you speak of our staying until Christmas, we wish it to be part of the arrangement that we should vacate the flat at any moment should you need it exclusively to yourself.  Circumstances might alter your plans, and then we cannot endure the thought that you should hesitate to let us know.  We shall keep this possibility always in view, so that you may feel assured that your flat is your own at any moment you want to have it.
As to your coming to stay the night at the flat when I am not there, it would never have occurred to me to accept it under any other conditions.  Such a concession

to conventions never entered my head; it seems to me not only totally unnecessary, but also would destroy for me all the pleasure we take in the informality of the arrangement.
I had been counting upon seeing you and having a talk with you in London before leaving for High Wycombe.[2]  Vivien understood from your letter that you would be staying Wednesday night in town, and it stupidly did not occur to me that you would be leaving so early Thursday as to prevent us seeing you.  Otherwise we should not have consented to the arrangement to which we are now bound.  I am so anxious to see you that I cannot help trying to persuade you to spend Wednesday night

in Eastbourne.  Is this possible?  It would give us both great delight.  Vivien is still so unwell, that we are having a doctor come to set our minds at rest; but by that time she ought to be much better, and in any case it would be a great satisfaction to us if I could see you.
Failing this, I might possibly be able to come up to town on Wednesday alone, in the hope of having the evening or afternoon with you, leaving Vivien to follow me on Thursday.  If you cannot come to Eastbourne, and if you could see me in London, I shall try to do this.
Hoping to hear from you, and hoping very much that you can spend Wednesday here,

[1] Russell’s letter to Eliot has not survived.

[2] Eliot had accepted a position to teach at High Wycombe Grammar School. 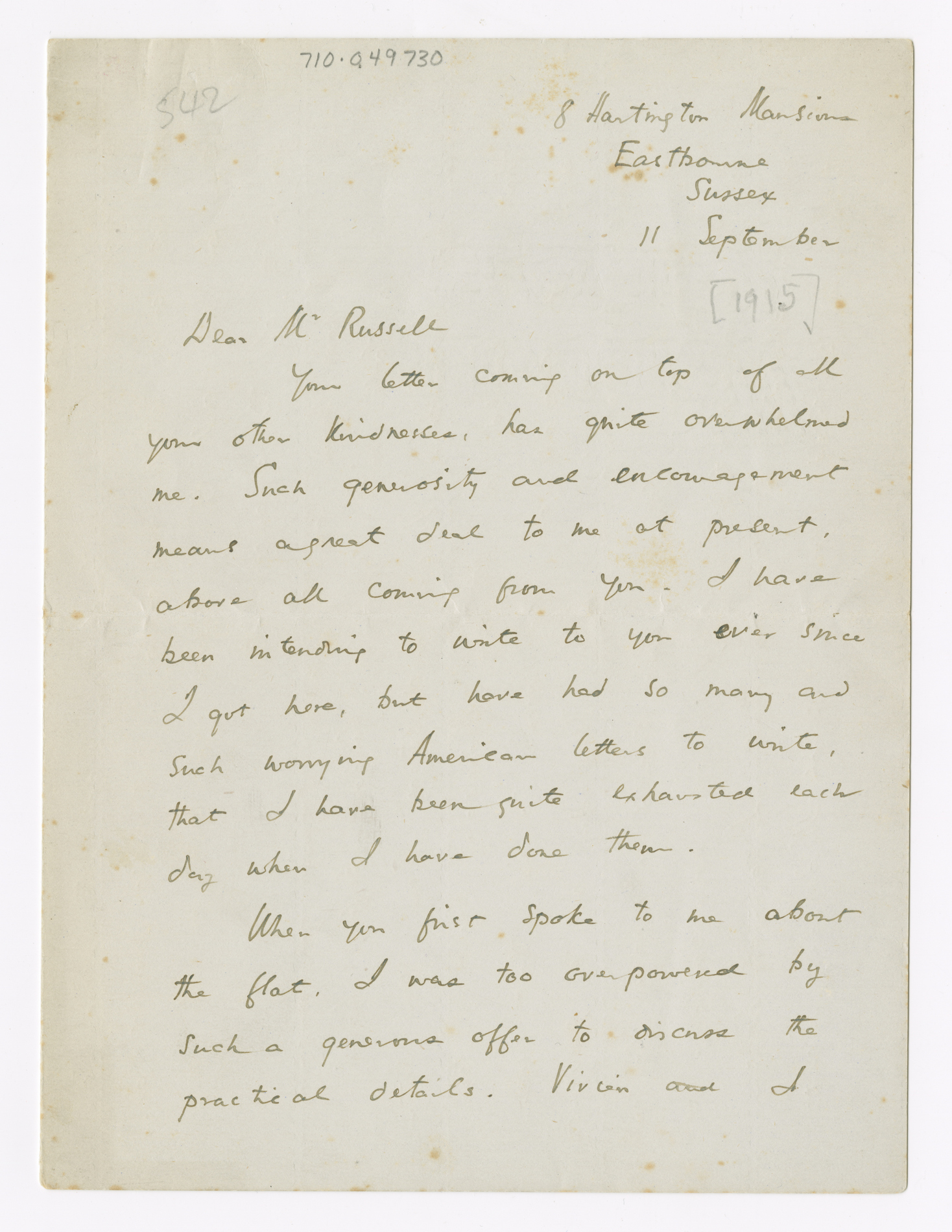 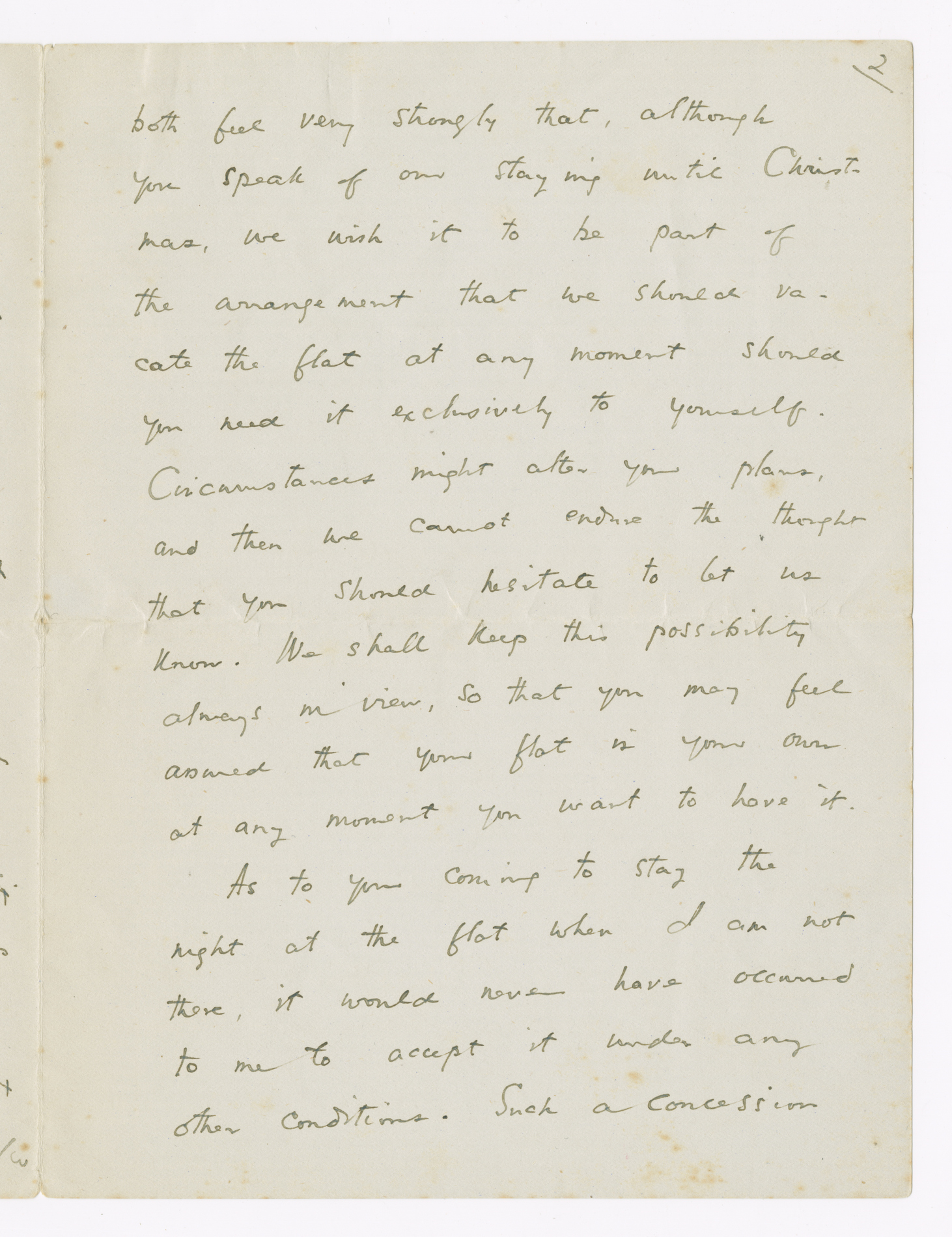 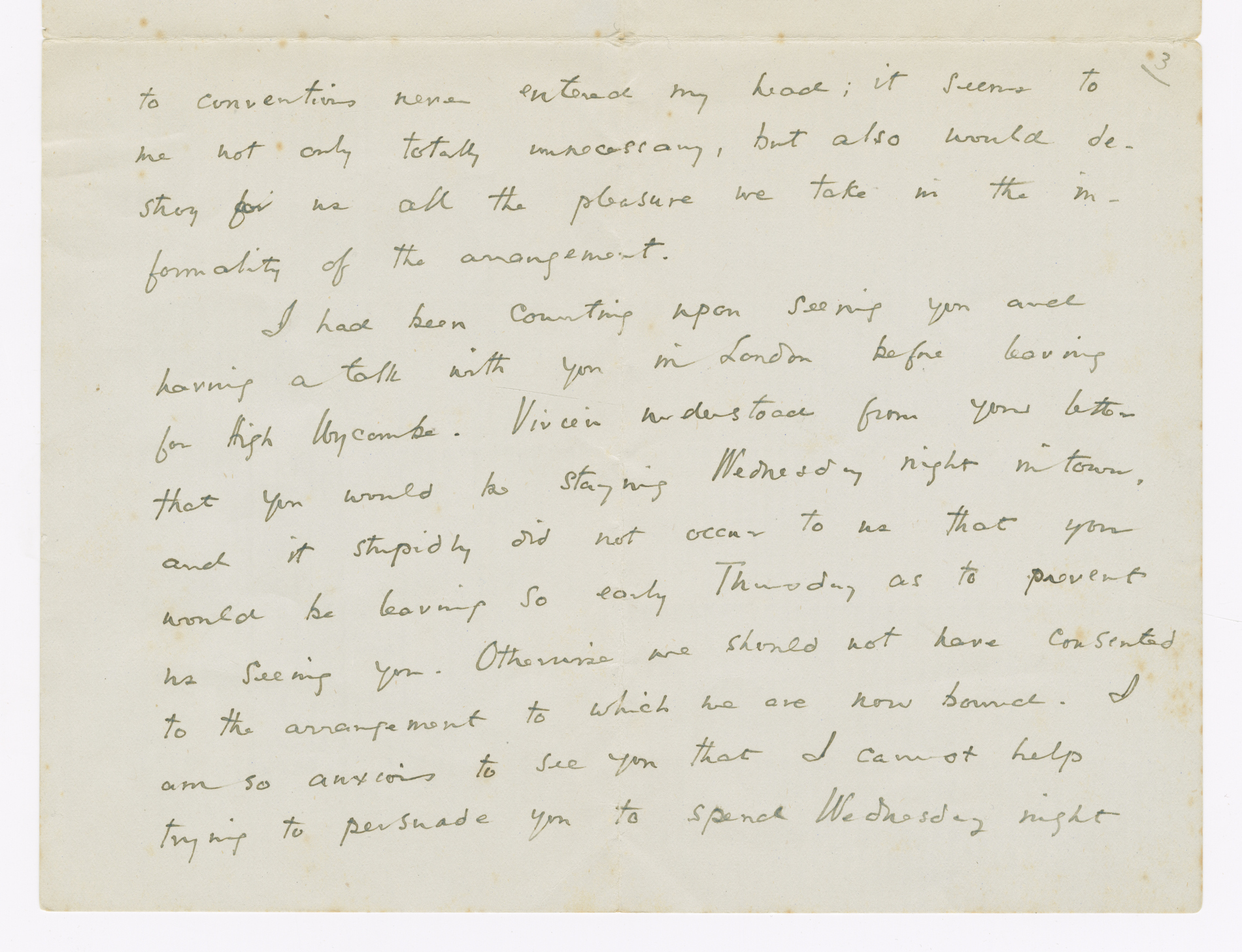 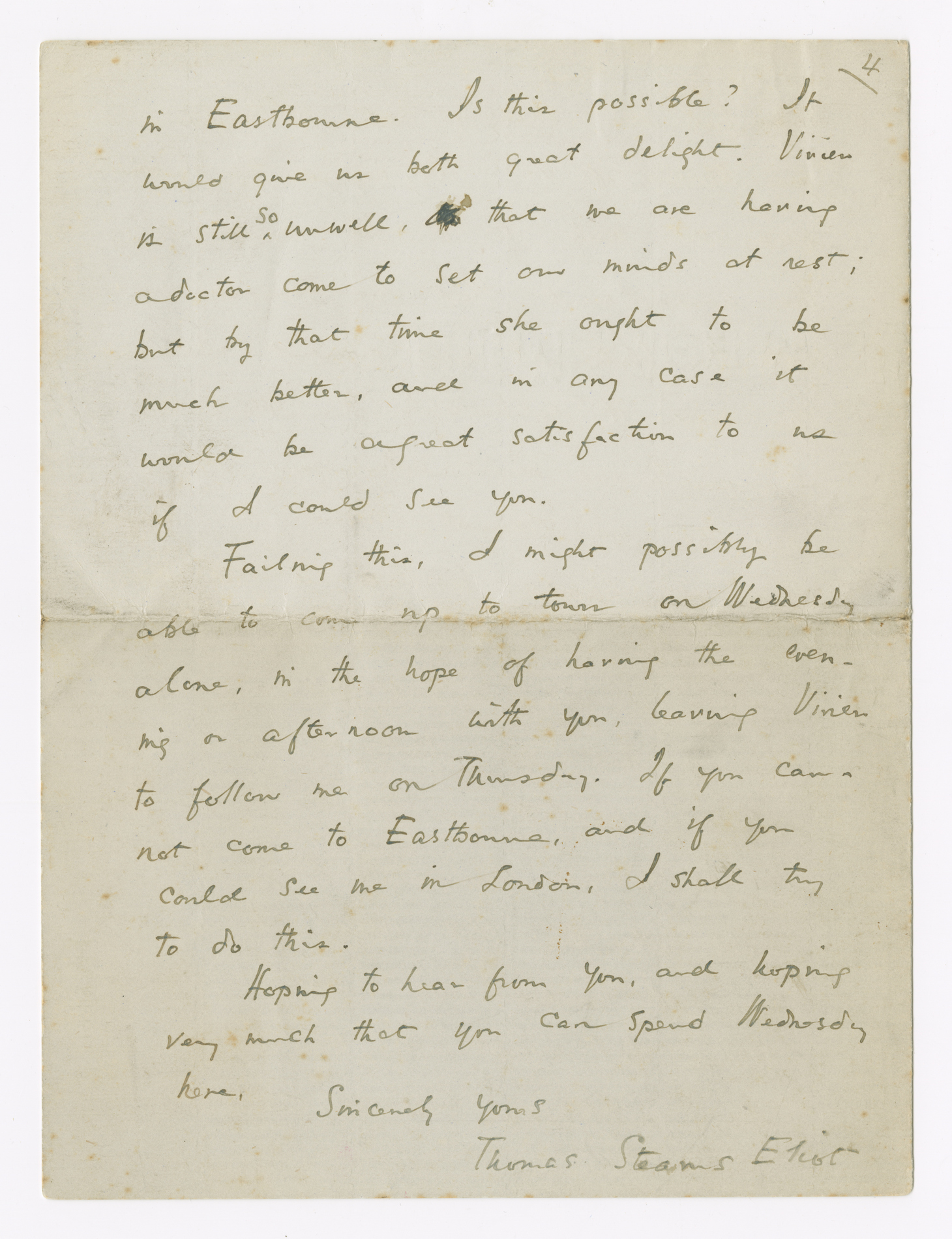 Bertrand Russell Archives, Box 5.15, Document 049730. Public domain in Canada. Copy provided for personal and research use only. For any other use, the user assumes all risk.